Maria Maier, Managing Director at NOWOFOL, celebrate her 40 anniversary with the company. 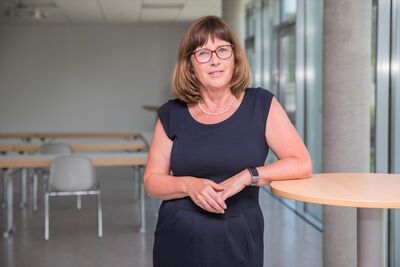 The national equality strategy, recently presented by the Federal Minister for Family Affairs and Women, Franziska Giffey, aims to bring more women into leading positions. Even in 2020, women in management are an important and much-discussed topic. According to a study conducted by the Allbright Foundation in 2019, 103 of 160 listed companies did not have a single woman on their boards of directors. Small and medium-sized companies do slightly better. Today, 16.1% of the approximately 3.81 million medium-sized companies are managed by a woman. This means that there are around 613,000 SMEs in Germany with a woman in the executive chair.

One of them is Maria Maier, who has been with NOWOFOL Kunststoffprodukte in Siegsdorf for 40 years now and since 2015, she’s in the management board, responsible for finance, personnel, sales & logistics. When a young Maria Maier started her apprenticeship at NOWOFOL in 1980, nobody would have bet that she would make it to the executive floor. In the first years of her career, Mrs. Maier supported the long-time managing director Gert Schmeer, who from the very beginning counted on his female employees. Thus, he delegated the production management of NOWOFOL and its subsidiary NOWOFLON to women - an absolute exception in the plastics industry of the 80s.

When asked what, apart from the trust placed in her, was decisive for her success, Mrs. Maier talks about responsibility. "Responsibility is always present with me. After all, it is all about our employees and their families," says Maier. "Today’s working world is changing fast due to digitalization. According to these changes which make people feel unsure, a sense of responsibility is particularly important. By this, I mean both the company's responsibility to its employees and the responsibility each employee must assume for themselves by being prepared to learn new things constantly," adds the 55-year-old mother of two.

She has actively accompanied and persistently steered the continuous development of the company in various professional functions and has continuously developed herself. As far as finance is concerned, for example, she learned this subject from scratch. "Numbers have always been my favorite, and the Corona crisis has just shown once again how important a sound financial policy is," explains Mrs. Maier.

The managing director emphasizes that, with regard to a career at NOWOFOL, performance and results have always been the main focus. Neither gender, title, age, origin, or religion play a role, the decisive factor is how well someone performs. Everyone designs their own career path, to a certain extent. This requires the necessary knowledge, commitment, joy, and empathy for their work, for their employer and their colleagues. According to Mrs. Maier the most significant challenge for the next few years is the integration of the young generation of employees, who shares different goals and values than previous generations. To remain attractive as an employer, it is essential to continue to develop. However, Generation Z also has to take responsibility for itself. To be successful in your career, Mrs.  Maier gives all young people the same advice: "Do something that really interests you and makes you happy, take responsibility for your actions and be persistent and willing to learn all your life.”